DO NOT MISS SheROCKS EVENT! 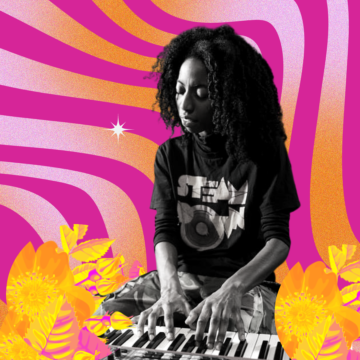 Roella Oloro is a British-born composer and multi-instrumentalist of Nigerian and Jamaican descent. She first moved to London in 2017 to study at Trinity Laban and quickly got involved with London’s vibrant scene, performing at venues such as Ronnie’s Scott’s and Pizza Express. As a composer, she has written for a variety of different ensembles. One of her first pieces for big band ,”Cruisin'” was played at the Royal Albert Hall in 2016. In Summer 2018, she was offered a full scholarship to study at Berklee College of Music after attending the school’s 5- Week Performance Programme. Thanks to a rigorous fundraising campaign and much help from the music education network Tomorrow’s Warriors, she now currently attends Berklee College of Music. She recently won the ISJAC (International Society of Jazz Arrangers and Composers prize for Emerging Black Composers. In May 2022, she travelled to Austin, Texas to accept her award and perform with the 17-piece jazz orchestra that was provided.

Whilst at Berklee she has received tutelage from exceptional professors such as NEA Jazz Masters Terri Lyne-Carrington and Joanne Brackeen and Grammy nominated saxophonist Tia Fuller. In spring 2022, she studied with Esperanza Spalding at Harvard as part of Spalding’s Black Improvisational Music and Dance class. She has received one to one lessons, comments and feedback from Patrice Rushen, Wayne Shorter, Melissa Aldana, Helen Sung, Camille Thurman, Rafael Zaldivar and many others. One of her most notable Berklee opportunities was performing with Berklee’s Jazz and Gender Justice Institute on WGBH’s “Basic Black” TV show in Fall 2019.” Over the course of the pandemic, She was a BBC Young Musician 2020 Semi-finalist, a Jazz South UK grant recipient, appeared on Decca Records’, “Alone Together” Jazz piano album, on British TV as part of “Jazz 625, the British Jazz Explosion” and released her first single entitled “Sacrificial Lamb. Roella booked a mini-tour to coincide with the London Jazz Fest of November 2022, bringing fellow bandmates from Berklee to the UK. Her Trio played 5 shows; where the two biggest venues -a Late Late Show at Ronnie Scott’s Jazz club and the Elgar Room at the Royal Albert Hall- were sold out.